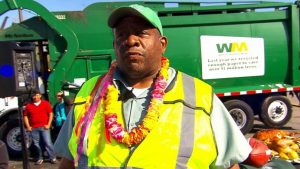 The June 2015 report, “Sustainable and Safe Recycling: Protecting Workers Who Protect the Planet,” revealed the unique and sometimes fatal hazards that recycling workers face on the job. The study detailed 17 recycling worker deaths between 2011 and 2013 and examined the high rate of injuries and illnesses in the industry.  According to the Occupational Safety and Health Administration (OSHA), workers in recycling facilities are “exposed to many serious safety hazards, including being struck-by, caught-in, caught-between, and falling off, various heavy equipment, process equipment, motor vehicles, powered industrial trucks, and refuse handling equipment and conveyors.” In addition, “recent inspection reports and activity has identified the use of temporary workers… [who] are more vulnerable to workplace safety and health hazards as they are often not given adequate safety and health training, equipment, and explanation of their job tasks and duties.”

Between 2010 and 2015, Federal and State OSHA inspections found breaches of requirements 65% of the time, totaling over 1,200 violations.

In my own review of 2010-2015 Federal and State OSHA inspections of recycling facilities, OSHA found breaches of safety requirements 65% of the time, totaling over 1,200 violations. Overall, 66% of the violations were considered serious or willful, or were a repeat violation (meaning the facility had already been cited by OSHA for the same problem, but it was never fixed). The vast majority of these violations can be remediated with simple solutions that save lives – unfortunately it often takes an OSHA inspection, or worse, an injury or death of a worker, for companies to comply with the law.

Over a third of all waste in the U.S. is diverted from the landfill in over 1,700 MRFs by over 22,000 workers.  As states and municipalities around the country enact mandates and goals to increase recycling rates, these numbers are expected to grow. Without deliberate action by communities, businesses, and government, thousands of recycling workers will continue to face dangerous conditions on the job.

We can keep these professionals safe by adopting the recommended best practices enumerated in “Sustainable and Safe Recycling: Protecting Workers Who Protect the Planet,” which include:

Keeping our friends and neighbors safe from unnecessary work hazards is good for the community, the environment, and good business practice – that’s why SWEEP will promote best labor practices through its criteria.