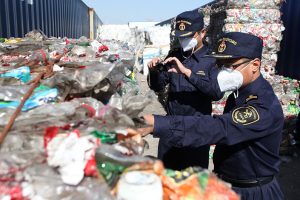 Earlier this month, we published a piece based on Waste Dive’s excellent ongoing investigation of the effects of China’s material import ban on America’s recycling infrastructure. The analysis was performed on a state-by-state basis and categorized impacted recycling infrastructure as either “Minimal,” “Noticeable,” or “Heavy.” Minimal indicated no major issues in program scope or performance, Noticeable indicated slower facility output and recycling program cuts under consideration or being implemented, and Heavy indicated shrunken or vanished markets, significantly cut back programs, and recyclables being landfilled instead of being processed for reuse.

Because the market is changing rapidly and we’d like to update this piece often, here are the latest highlights for the month of July (as of 7/20).

All together, July 2018 observes 78% of total states identifying as either Noticeable or Heavy, representing 88.2% of the US GDP and 89% of the US population. Compared to June 2018, where 68% of total states identified as Noticeable or Heavy, representing 75% of the nation’s GDP and 72% of the nation’s population, these numbers are significant.

We will continue to track and discuss Waste Dive’s analysis as it is published. Stay tuned for a series, of which this is the second edition.