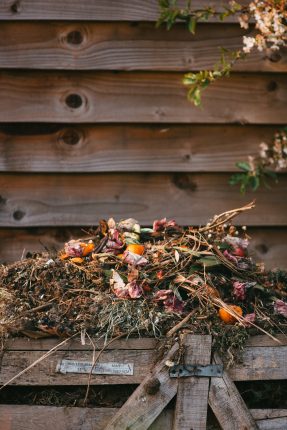 Every time I slide the remaining food scraps off my plate and into my garbage can, a little piece of me dies inside. Okay, maybe that’s a bit dramatic, but after learning that an estimated 40% of food produced in the U.S. is lost or wasted, it’s clear that food waste is one of the most concerning environmental issues currently facing our country.

Food is the single-largest input in landfills and costs the U.S. an estimated $408 billion (with a “b”) per year, which is roughly 2% of US GDP. Landfilled food waste is a significant source of methane, a potent greenhouse gas (GHG). Methane from landfills accounts for about 4% of US GHG emissions, and only adds more fuel to the already raging fire that’s warming our planet.

When my banana peels, eggshells, coffee grounds, and the like, make their way from my apartment’s trash can to their final resting place in a landfill, the food scraps get tucked away beneath a literal mountain of other garbage, soil, and lord knows what else. Without access to oxygen, the scraps undergo anaerobic decomposition, a process that releases methane. And unless the landfill in question is able to effectively capture that methane, the gas gets released into the atmosphere, which is problematic, to say the least.

Methane’s global warming potential (GWP) is 84x that of CO2, or in other words, 1kg of methane released into the atmosphere is about the equivalent of releasing 84kgs of CO2. With NOAA recently reporting that atmospheric CO2 levels hit an all-time high last month, methane’s potency as a GHG becomes even more concerning.

An important distinction here is that any carbon dioxide added to the atmosphere will hang around for a very long time — anywhere between 300-1,000 years, all the while trapping heat and warming the atmosphere. Methane, however, only persists in the atmosphere for a little more than a decade. To derive an accurate comparison between the GWP of carbon dioxide and methane, the gases are compared on a 100-year time scale. Evaluating both of these GHGs over this time scale demonstrates how much of the methane chemical would warm the earth over a 100-year period compared to carbon dioxide. When all is said and done, methane’s 100-year GWP is about 28x that of CO2. To recap, there’s less methane released into the atmosphere compared to CO2, and it only sticks around for about a decade, but it is much more potent of a GHG than CO2 is when it comes to GWP. Long story short, the food waste that ends up in landfills and the methane it emits has a detrimental warming effect on our planet’s climate.

Now you might be asking yourself, Sam, why don’t you compost your food scraps like any sustainability-minded, environmentally conscious person would? The answer is, similar to hundreds of other cities across the US, NYC’s composting programs were the first initiatives to be cut due to pandemic budget constraints, leaving me and thousands of others stranded on our own respective islands of food waste.

In New York’s case, the city does plan to revive its composting programs come October, but many environmentalists say that it’s more of a rollback than a revival. Neighborhoods that had curbside compost services pre-pandemic will again be eligible for free food waste pickup, but buildings must now sign up for the service instead of being automatically enrolled. And neighborhoods that did not have programs before, still won’t. The voluntary nature of these programs is the crux of the problem, and the revitalization of the city’s composting program is projected to do little in helping achieve NYC’s goal of diverting 90% of its trash from landfills by 2030.

So, why don’t major cities across the U.S. have universal curbside compost collection and/or thriving community drop-off programs for organic material like food scraps and yard waste? Unsurprisingly, like most environmental initiatives, the answer boils down to a lack of funding, public education, and adoption due to inconvenience.

Cities often lack the capacity to fund waste audits, even on a 5-10 year basis, which creates significant barriers in writing and passing composting policy on a municipal scale. This funding issue is compounded by the lack of stakeholder buy-in needed to consistently provide enough organic waste to make these programs profitable.

Proposed strategies to overcome these hurdles include, incentivizing the development of infrastructure that would enable larger-scale composting through marketing campaigns, which ideally would increase demand for finished compost. In theory, this strategy would also expand appropriations for municipal compost and food waste reduction pilot projects.

Many believe that the federal government needs to lead by example and that there’s a golden opportunity for President Biden to mandate that federal agencies measure, rescue, and recycle food scraps and food waste. Yet, it must be noted that there were zero mentions of organics infrastructure in Biden’s wide-reaching infrastructure plan unveiled a couple of months ago. One can only hope that the action plan to curb food loss and waste in the U.S., which was recently pitched to congress, will gain traction. The plan calls for allocating $650 million annually through at least 2030 to states and cities for organic waste recycling infrastructure and other food waste reduction strategies.

As the country slowly moves toward reopening in the coming months, the timing is certainly ripe for substantial action to be taken on organics infrastructure and composting programs. Something every city, the country as a whole, and the planet desperately needs.