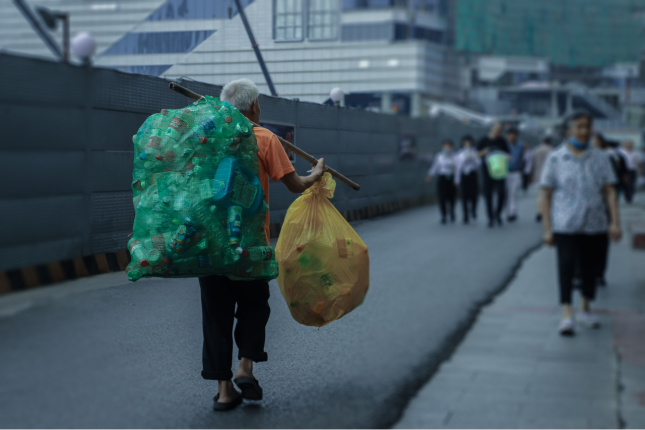 With conversations surrounding EPR (Extended Producer Responsibility) reaching a crescendo, it’s a good time to take a step back and try to demystify what EPR entails, the various models proposed, and the concerns associated with it from stakeholders across the waste management industry in the U.S.

EPR isn’t a new concept. It’s been commonplace in Europe and some Canadian provinces for decades and, in recent years, has been adopted in certain Asian and South American countries. For years, EPR has even existed in the U.S. for a variety of products, including paint, carpet, batteries, mattresses, and pharmaceuticals. But in recent years, the cost of municipal recycling systems has ballooned due to changes in recycling markets caused by recent international trade policies and producers creating more complex packaging, some of which cannot be recycled at all. Traditionally, municipalities and taxpayers have borne the brunt of the financial burden associated with material recovery and disposal. But EPR is a paradigm shift that aims to hold producers responsible for the collection, recovery, and disposal of the products they sell on the open market.

Ideally, well-crafted EPR policies can have a domino effect, opening doors to other recycling and waste reduction mandates that reduce disposal and incentivize producers to redesign products to either be more readily recyclable or reusable. But not all EPR policies are created equal and various models hold different weights for packaging manufacturers, waste and recycling service providers, and local governments to name a few key stakeholders.

The most common strategy in the slew of recently proposed EPR bills is the Municipal Reimbursement Model (MRM). The MRM sits on one side of the EPR spectrum and involves municipalities retaining all or most of the control over the management of existing recycling operations and contracts. In this model,  stewardship groups take on the responsibility of reimbursing local governments for the cost of trucks, sorting, and other operational expenses. Producers have less control in this model, but also have less responsibility. The MRM is designed to have producers pay a higher fee for materials that have limited end markets and/or are harder to recycle. Oregon, Washington, Maryland are among the states that currently support and intend to follow this model.

The full producer responsibility model sits at the opposite end of the EPR spectrum, leaving local governments out of the operational process. This standard gives stewardship organizations much more control of the recycling process, handling everything from contracting with MRFs and haulers to running day-to-day operations. As it’s currently written, Hawaii’s HB 1316 bill is considered to follow the full producer responsibility model and would allow packaging producers to enter contracts with counties to collect or manage waste.

Just because there is a bevy of packaging EPR bills making their way through Congress this year, doesn’t mean that everyone is all for it. Concerns associated with EPR bills include a lack of recognition of the needs of rural communities and the need to address how to handle funding in areas that are subscription service-based versus having municipal or county contracts. There is also unease that it would hurt the hauler’s ability to maintain relationships with their municipal customers. Anything that hinders the ability of private waste management services to directly contract with their customers is naturally going to be a hard sell. And while these are certainly warranted concerns, this year we’ve seen significant progress with stakeholders who were once opposed to EPR action starting to warm up to the idea or are neutral on the concept if certain stipulations are met.

EPR is a key component of having the U.S. move towards a more circular economy, and with all meaningful policy action, stakeholders from every part of the industry need to have their say in the decision-making process. Integrating producers, recyclers, haulers and the like is not an easy feat but is crucial to the success of passing meaningful EPR policies across the country. While these types of decisions are being discussed at a state level, stakeholders should also be paying attention to what’s happening at the national level. The Break Free From Plastic Pollution Act is gaining momentum and calls for EPR programs and product stewardship for packaging, plastic bans, reduction efforts, and a nationwide 10-cent beverage container deposit program. Leadership from the federal government is very much needed on the issue if the U.S. wants to address the plastic waste crisis we find ourselves in.

I’m a firm believer that in every crisis lies the seed of opportunity. This sentiment has never resonated more than during this past year of immense disruption brought on by the pandemic. Almost every industry has had to pivot and adapt to changes in the status quo, and recycling is no different. We’ve seen a boom in e-commerce which has created historic demand for turning old cardboard boxes into new ones and prices for recycled plastic are higher than ever. Where there’s money to be made, positive action can be accelerated. And as EPR action is gaining steam on both the state and federal level, 2021 could be the year that the country takes advantage of the disruption in the recycling market and establishes policies that work for producers, consumers, local governments, waste management service providers, and the planet we all share.