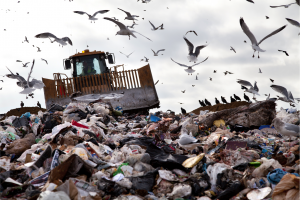 The average price to landfill a ton of municipal solid waste (MSW) in the US continues its slow, steady rise to nearly $49 last month. That was up from $48 or 1.5 percent from a year ago. The cost to landfill a ton of construction debris rose nearly 4 percent to $40 this year from about $38 last year, reflecting the rebound in home prices and new construction. The modest rise in pricing for MSW is attributable to modest economic growth but also indicates discipline among waste management firms that are seeking to avoid costly market share wars with one another as had been done in the past.

Waste firms today, by virtue of industry consolidation and clever asset allocation and acquisitions, are more vertically integrated than ever and work hard to move waste from its point of collection to processing and disposal in the most efficient manner possible.

The availability of landfill space is a big factor in determining pricing, which is why pricing varies by more than a factor of two among different regions of the country as shown in the table below. The most important variables determining average tip-fees include: available landfill space, population density, which dictates demand for disposal, economic activity, regulation, available infrastructure and other factors.

Consequently, prices are highest in the Northeast, which has the least landfill space amid high population density. There, the cost to landfill a ton of MSW is currently $78. Contrast that with the Midwest, where the cost is closer to the national average at $48. The difference in pricing between these regions explains why much of the Northeast’s wastes are exported to Pennsylvania, Virginia, Ohio and other more rural nearby states. This volume from the Northeast, in turn, drives up the pricing in the Midwest. Further away in the Southeast, it’s even cheaper to dump: $41 per ton of MSW. The Western states, with so much space available amid relatively lower population density, has the lowest cost to landfill a ton of MSW at $35. The cost to landfill in the Pacific states is around $57, primarily due to both population and greater regulation, which limits landfill space and mandates greater diversion and recycling.

Cost to Landfill a Ton of MSW by Year and Region