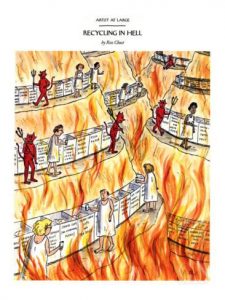 Separation (plus a little cleaning), then, is the principal difference between valuable feedstocks and garbage.

The continuum of approaches to this problem ranges from multi-route, multi-bin source separation approaches through single-stream and end with the mixed waste, “One Bin for All” approach.[1]

Proponents along the continuum all agree that:

Where we diverge is whether human participation in the act of separation is the most effective and economic path of material recovery or whether insisting on this prevents more effective approaches from taking root.

Tried & True or Tired & Through?

Business-as-usual advocates take a decidedly 20th-century approach to a 21st century environmental opportunity. The prevailing attitude reflects the adage: “If it ain’t broke, don’t fix it.”

The basic structure of the recycling industry has not changed much from when I was a sixth grade volunteer at the Tiburon, California recycling drop-off center in 1972. BAU recycling is predicated on a ‘Tale of Two Waste Streams’: one is the valuable “recyclables” (metals, paper, #1 & 2 plastics & glass) the other is, well, garbage. And, like peas and potatoes on a 6-year-olds’ plate, these two things must never touch each other.

Sure, trucks now come to you in many parts the country, but the stale definition of “recyclables” is still confined to a minority – and shrinking – percentage of the waste stream. And, even after decades of exhortation, education and billions of dollars spent operating recycling programs, national diversion rates are flat and, in fact, are likely being significantly exaggerated (I’m looking at YOU, San Francisco).

Even in Europe, often held as a bastion of advanced recycling behavior, BAU source separation approaches capture barely more than 40% of the waste stream, with the rest mostly incinerated. Of course, the Europeans throw out only about half of what Americans do. More on that later.

While BAU recycling isn’t completely ‘broke,’ many municipalities are heading in that direction trying to implement programs with severe diminishing returns. In New York City, for example, collecting and processing a ton of mixed municipal waste costs approximately $263 per ton. Conventional ‘recyclables’ on the other hand cost nearly $630 per ton to collect and process, even when the revenues from the sales of the recovered materials are taken into account. Average revenue to New York per ton of recycled material is less than $14, which results in disposal cost savings of about 11%, but makes no dent in collection costs.[2] In fact, NYC collection costs have doubled in the last 7 years while diversion has fallen from 17% to 15%.[3] In spite of this dismal performance, the City is doubling down on source separation strategies and is building up to citywide organics collection.

With regards to BAU recycling, I propose a corollary adage: “If it ain’t workin’, don’t expand it.”

Separation is the key

In reality, source separation and mixed waste advocates are not arguing about “recycling.” We all agree that it is an insult and a travesty that, as a nation, we generate over 7 pounds of waste per capita (EPA’s figures are almost 40% below what the landfills report) and that over two thirds of that waste goes into a hole in the ground or up a smokestack.

Recycling has been defined as a chain of actions to extend a material’s useful life, and we all know that a chain breaks at its weakest link. The weak link in business-as-usual recycling is separation.

A revolutionary goal such as Zero Waste requires a fundamental, systemic rethinking of how we approach the entire material lifecycle, not reliance on expanding dated practices. Europe has done an exemplary job on the top half of the waste hierarchy: their citizens generate about one third as much household waste as we do in America. However, on the recovery side of the ledger, even the top EU diversion rates barely crack 60 percent and in the EU as a whole, over half of the waste stream is landfilled or incinerated.[4]

In the second part of the article I will demonstrate how using physics – density, dimension, and optical properties – at centralized locations ultimately will be a far superior way to separate materials for reuse than relying on millions of well-meaning, but confused and partially motivated consumers.

[2] Citizens Budget Commission, 12 Things New Yorkers Should Know about their Garbage, May 2014, and author calculations.