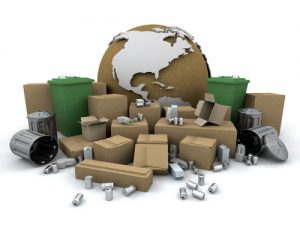 The U.S. generates a lot of packaging waste each year. The EPA’s most recent estimate came in at over 75 million tons for the year 2013, the highest the figure has been since before the economic downturn of 2007. That’s about a quarter ton of packaging per capita per year. Packaging generation has made a solid rebound and appears to have leveled off, and if “peak packaging” isn’t apparent, the plateau certainly is:

While absolute packaging generation appears to have plateaued, other ways of framing the data tells a very different story. In fact, another look at packaging generation statistics tells us that peak packaging passed us about fifteen years ago. Look at the same curve except on a U.S. per capita basis:

Though it was never celebrated, peak packaging came and went in the year 2000. We’re in a post-peak-packaging economy! Even with the rebound following the economic downturn, Per capita packaging generation has fallen from 0.27 tons per person annually in 2000 to less than 0.24 tons in 2013, having trended downward steadily since 2009 and roughly equivalent to 1983 levels.

Packaging has become – and will continue to become – more efficient, which is encouraging, however the overall recycling rate for packaging appears to have plateaued, having been estimated at 51.5% in 2013 with zero growth from the previous year. A plateau is better than a peak here, but it’s important in our post-peak-packaging economy to pivot our attention from reducing the amount generated to a sharp focus on increasing the amount recovered and ensuring that the recycling rate keeps climbing.